Teachers in California are facing increased pressure to return to campus before they receive COVID-19 vaccinations.

The debate over reopening schools in California has intensified after Gov. Gavin Newsom and the Biden administration said campuses could safely reopen without teachers being vaccinated — and as unions have pushed back, calling for school workers to be immunized as part of any sweeping reopening effort to return students to classrooms.

The discussion comes as coronavirus infection rates and other health metrics in the state trend in a positive direction. That could soon allow for the reopening of campuses that have been closed since March in Los Angeles, Orange and San Diego counties, among others.

California and federal officials have insisted for some time that campuses for kindergarten through 12th-grade students can reopen safely without teachers being vaccinated. On Wednesday, they reiterated that point, while the Southern California chapter of the American Academy of Pediatrics asserted that the harm of keeping children out of school outweighs the risks of reopening.

But two statewide teachers unions have opposed all in-person instruction in counties that are in the worst tier for coronavirus spread. And some districts, including L.A. Unified, have been reluctant to reopen campuses without immunizing staff. In San Francisco, city officials took the unusual step of suing their own school system for not ramping up in-person services.

As President Biden settles in at the White House, Californians have a singular message for the new administration: Take care of the coronavirus.

That’s the clear takeaway from a new statewide poll by the UC Berkeley Institute of Governmental Studies that asked California voters to choose three priorities from a list of 13 issues. Relief from the virus topped the list — picked by 56% of voters — and was the only priority a majority agreed upon.

Biden’s fellow Democrats overwhelmingly named coronavirus relief as their chief concern, with just over 7 in 10 choosing it, far ahead of other party priorities such as healthcare, climate change and race relations. The virus also topped the list for slightly more than half of the state’s large bloc of nonpartisan voters.

But only 29% of registered Republicans listed the coronavirus as a major concern.

— House Republicans decided to stand by two GOP lawmakers who have polarized the party, voting to retain Rep. Liz Cheney as their No. 3 leader and saying they’d fight a Democratic push to kick Rep. Marjorie Taylor Greene off her committees.

— A TV interview backfired for Vice President Kamala Harris. It was a small stumble with a big lesson.

For more news and analysis, sign up for our Essential Politics newsletter, sent to your inbox three days a week.

Paying Through the Nose

Loss of taste or smell may be the first thing that prompts someone to get tested for a coronavirus infection. Researchers have even questioned whether smell tests are a better screening tool than temperature checks.

Though most people recover their senses within weeks, 10% suffer long-term smell dysfunction, some researchers estimate. In some cases, it starts out with anosmia (a complete loss of smell) before developing into parosmia (distorted smells).

As today’s Column One feature explains, some people will try anything to regain their sense of smell — and the business of olfaction restoration is booming.

— Two mass vaccination sites in California announced by the federal government, including one at Cal State L.A., will provide COVID-19 vaccines to vulnerable communities and people with limited access to transportation — a move that would try to address problems for seniors who have struggled to get to sites around the country.

— Researchers said AstraZeneca’s COVID-19 vaccine does more than prevent people from falling seriously ill — it appears to reduce transmission of the coronavirus and offers strong protection for three months on just a single dose.

On Feb. 4, 1985, staffers at the Santa Susana Field Laboratory watched as a column of fire and smoke erupted before them. It was a stunning view for a Los Angeles Times photographer but an average one for the laboratory, owned by the Rocketdyne division of Rockwell International Corp.

As The Times reported, “the engines for almost every American rocket came to life for the first time amid the sandstone and sage to these rough mountains” since 1947. In 1985, tests of rocket engines happened weekly. No flight, just “quick drama” and “a frightening concentration of sheer power.”

The facility closed in the 1990s and remains a heavily contaminated area.

— Backers of an effort to recall Gov. Gavin Newsom have raised more than $2.5 million, according to financial disclosures filed with the state through Tuesday. Political analysts say that’s approaching the minimum amount required to gather enough valid signatures to place the matter on the ballot. As The Times’ Sacramento bureau chief John Myers writes, it’s the biggest political challenge Newsom has faced.

— The California Supreme Court has thrown out a constitutional challenge to Proposition 22, which voters approved last year. That strengthens the position of gig economy companies, including Uber, Lyft and DoorDash, to keep treating their workers as independent contractors.

— The L.A. County Sheriff’s Department claimed protesters tried to derail a train. A Times review of evidence raises questions about both the validity of some of the charges and Dist. Atty. George Gascón’s decision to dismiss the entire case.

— Should University of California campus police be reformed or defunded? The question is at the heart of a sharp disagreement among students and staff.

— The Canadian government designated the Proud Boys group as a terrorist entity, noting it played a pivotal role in the insurrection at the U.S. Capitol on Jan. 6.

— The Justice Department dropped its discrimination lawsuit against Yale University that had alleged the school was illegally discriminating against Asian American and white applicants.

— Police in Myanmar have formally charged deposed national leader Aung San Suu Kyi with having several illegally imported walkie-talkies in her home, days after she was detained with other senior politicians in a military coup.

— A dozen state police officers in Mexico have been arrested on suspicion of killing 19 people, including Guatemalan migrants, near the U.S. border late last month.

— The nominations for the 2021 Golden Globes have arrived. Netflix once again dominated, with 42 nods, but fan-favorite “Bridgerton” was among the snubs. Read columnist Glenn Whipp’s full list of snubs and surprises and critic Lorraine Ali’s look at how TV delivered the blockbusters.

— A sizable group of awards-season films are set in the 1960s. The directors and writers behind them say it’s a key storytelling lens as we live through another turbulent era.

— Morgan Wallen, country music’s hottest recording artist, has been banned from the nation’s two largest radio networks and a TV network and suspended by his record label after he was recorded shouting a racist slur.

— CBS has sold out Super Bowl ads this year at $5.5 million for 30 seconds. But advertisers will be navigating a potential social media minefield during the pandemic.

— ViacomCBS is confronting a widening crisis. Current and former staff of CBS’ flagship station in New York have come forward with allegations of a “hostile environment” after a Los Angeles Times investigation into claims of racism and misogyny at CBS’ Philadelphia TV station.

— Anduril, the defense tech company started by virtual reality pioneer Palmer Luckey, is moving into a new corporate campus in Costa Mesa — in the shell of the former Orange County bureau and printing press of the Los Angeles Times. It’s one of the largest office leases in Orange County history.

— Olympic organizers hope the evolving playbook for COVID-19 will save the Tokyo Games.

— Erica Wheeler is back in the WNBA and says the Sparks can win the championship.

— Rep. Marjorie Taylor Greene is despicable, The Times’ editorial board writes, but Democrats will only play into her hands by removing her from committees.

— The GOP’s civil war is just beginning, and the fighting will get worse before it gets better, writes columnist Doyle McManus.

— A luxury condo boom brought ever-taller towers to American cities in the 2010s. Now that the first residents have settled in, they’re discovering the high life comes with significant problems. (New York Times)

The San Fernando Valley was long considered the Rodney Dangerfield of Los Angeles: It got no respect at all. Sure, it’s been in movies and song, but not always in the best of light. (Like, gag me with a spoon!) But as columnist Patt Morrison writes, the Valley has played an important role in California history. 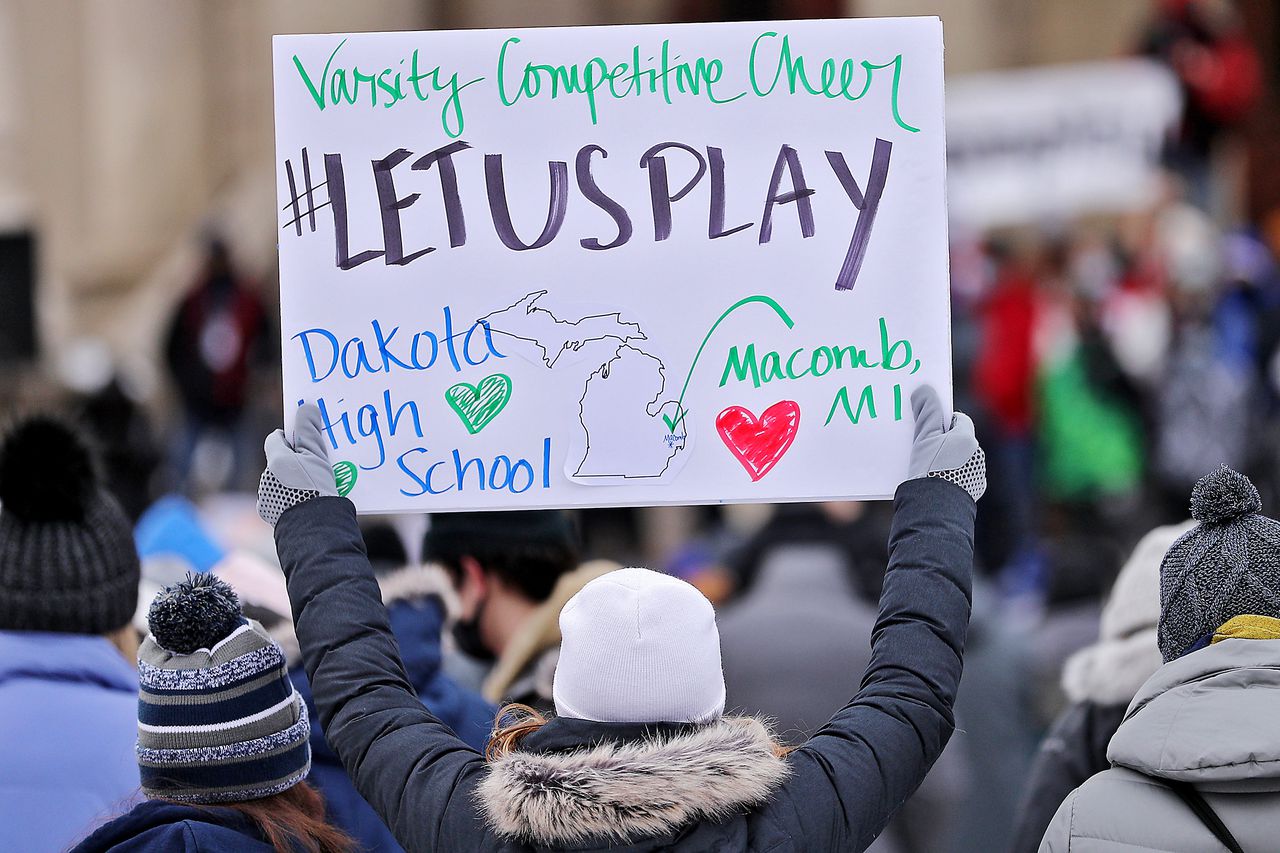