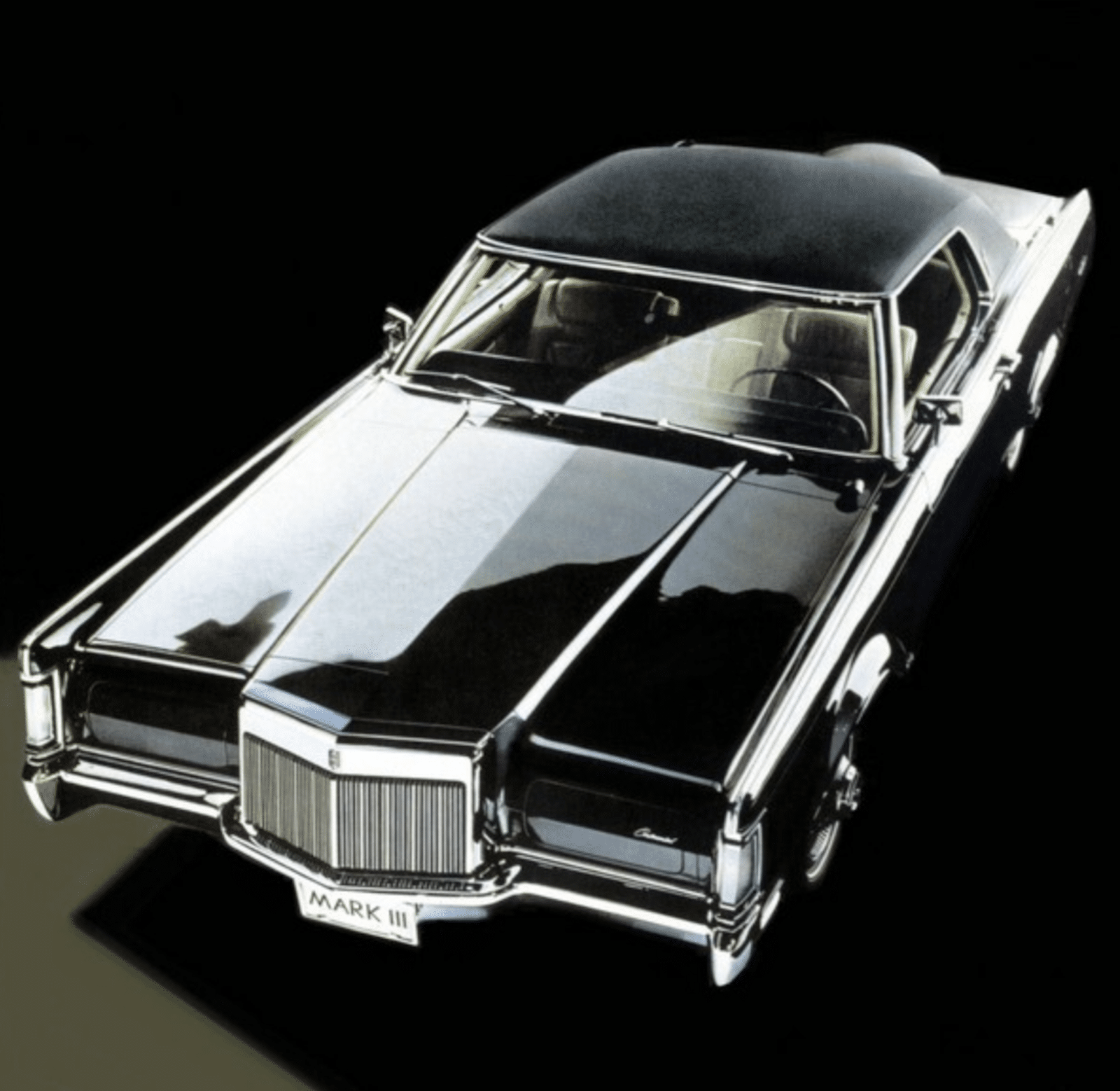 It’s been 100 years since Henry Ford acquired The Lincoln Motor Co. out of bankruptcy, an occasion worth celebrating.

Yet the Lincoln most remembered and revered by collectors, car designers and pop culture is the 1961 model, a vehicle that truly reset 1960s automotive design priorities with its clean, unadorned flanks and simple elegance and eloquence.

But its influence would lead to a car that debuted this week in 1968, one that would influence Lincoln automotive design for the next couple decades. It’s the 1968 Continental Mark III, a car that continued a special Lincoln lineage while redefining the brand’s design.

A car born of a vacation

The 1968 Lincoln Continental Mark III had its roots in the first Continental, which came about after Edsel Ford, president of the Lincoln Motor Co., returned from a trip to Europe in 1938. He challenged the company’s lead designer, Eugene Gregory, to produce something similar to the cars he saw while on vacation,­ something continental.

The result was the 1939 Lincoln Zephyr Continental and priced at $2,640, or $53,500 adjusted for inflation. Offered as a coupe or cabriolet, it was quickly embraced as a classic design. Architect Frank Lloyd Wright, who considered it “the most beautiful car in the world,” bought two. Ultimately, 5,324 Continentals were produced through 1948, when Ford Motor Co. decided not to replace it.

Exactly why remains unclear. Some sources point out that the market for such cars had dried up. Others cite Edsel’s untimely death in 1943, and the lack of vision for a new one. But sketches for a new 1948 Continental were considered.

A son’s tribute to his father

But dealers continued to pester Lincoln, asking when a new Continental was going to be produced. For William Clay Ford, 30, led the creation of a new Continental to honor his father in 1952, one that lived up to the original. Eschewing the garish chrome trim and outrageous tailfins typical of era, the Continental Mark II wore timeless, elegant lines, and was sold through Ford’s new Continental Division.

Powered by a 300-horsepower 6.0-liter V-8, and equipped with every conceivable convenience — air conditioning was the sole option — the coupe cost a staggering $10,000, more than twice the cost of other Lincoln models, yet Ford still lost money on each one. About 3,000 were built before Continental was folded back into Lincoln.

It’s replaced by 1958 Continental Mark III, a car that was everything the Mark II wasn’t. And while it may have been financially successful, its artistry was another matter. The Continental name would be used on the 1961 sedan, a car that truly reflected the original’s refined taste, but a new coupe wasn’t offered. It would take the vision of Ford Group Vice President Lee Iacocca to revive the hallowed name.

The newest Continental was born in 1965 as a personal-luxury coupe. The car would be called the Continental Mark III as Henry Ford II didn’t consider the heavyweight 1958-60 Mark III as true a Continental. Corporate design chief Gene Bordinat supervised its design, while Hermann Brunn, whose family had designed custom bodied cars in the 1930s, was mostly responsible for its interior design.

The car that emerged had updated hallmarks of the 1956 Mark II, as well as a vinyl roof. But its neo-classic grille marked a turn away from the modernist fascias that characterized Lincolns since 1961.

According to Ford Motor Co. archives, Jim Farrell, who wrote the Lincoln design book and personally interviewed many of the designers, says that designer Dave Ash got a call from Ford Motor Co.’s Group Vice President Lee Iacocca late one night telling him that he wanted to see a front-end design for the new Mark that was evocative of the Rolls-Royce grill placed on a Thunderbird. When he returned to Dearborn, designers had sketches ready, and Iacocca picked the one that ended up as the design.

But Iacocca’s request wasn’t a flash of design inspiration; Iacocca was no designer. But he knew what sold, and it’s possible that the inspiration for the grille came from an unlikely source: former Chrysler design boss Virgil Exner.

The new car’s style used 1930s styling cues, some of which had been seen on early ’60s Chryslers, others of which had not, including its long hood, tall neo-classic vertical grille and padded vinyl roof. Certainly nothing like it had been seen before. But its influence on Detroit designers would guide their designs for the better part of the next two decades.

Given the widespread publicity given this new Duesenberg, it’s likely that Iacocca liked what he saw, and wanted something similar for the new Mark III, which would also boast a long hood, tall neo-classic vertical grille and padded vinyl roof. It would even boast a fake rear spare tire bulge in the trunk lid, a nod to the rear-mounted spare tire of the original car. Certainly, its style was a departure for Lincoln, even as certain 1961 styling cues were maintained.

While the Mark III retained the Mark II’s trademark long-hood/short-deck style, it owed its proportions to its use of the Ford Thunderbird platform and inner body structure. It also borrowed its drivetrain and sub-dashboard assembly. A 7.5-liter V-8 with four-barrel carburetor produced 365 horsepower and 500 pound-feet of torque.

It was a success, becoming Lincoln’s flagship car. Soon, its ersatz classic cues popped up on the Lincoln Town Car Versailles, and it would remain a mainstay of the Lincoln line-up into the 1990s. Its neo-classic style would live on even as its design was modernized, something that would be finally banished within the end of Lincoln Town Car production in 2010.