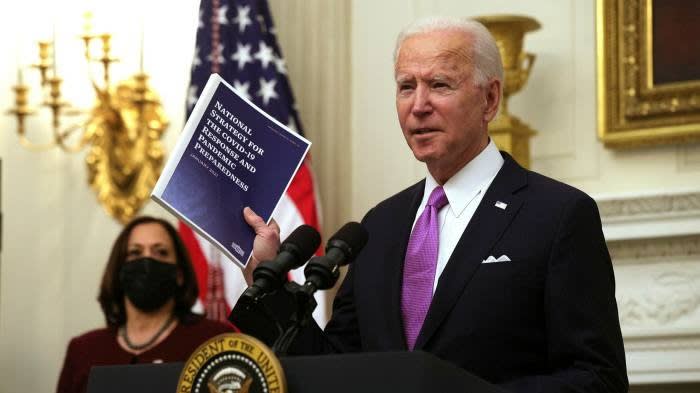 How well did you keep up with the news this week? Take our quiz.

Coronavirus will have killed half a million people in the US by the end of next month, Joe Biden forecast on Thursday, as the new president faced questions over whether his vaccination programme was ambitious enough.

The latest figures showed another 3,889 people died from the virus on Thursday. That follows a record single-day increase of 4,409 deaths on Wednesday.

Asked by a reporter whether his target to inoculate 100m people in his first 100 days in office was ambitious enough he replied “come on, give me a break, man.”

“The honest truth is, we’re still in a dark winter of this pandemic,” Mr Biden said. “It’s going to get worse before it gets better. It’s going to take many months to get where we need to be.”

Nancy Pelosi said the US House of Representatives was “completely ready” to pass Mr Biden’s $1.9tn coronavirus relief bill by February 1. But the bill is expected to face significant obstacles in both chambers of Congress, given the Democratic party’s small majorities.

Wrangling over the stimulus package on Capitol Hill comes amid uncertainty over the timing of Donald Trump’s second impeachment trial.

It remains unclear whether the Senate will hold a trial at the same time as debating a stimulus package, amid concerns it could interfere with Democrats’ legislative agenda. (FT)

Unequal vaccine access will return to haunt the rich, writes David Pilling and Tom Braithwaite says forget the ‘beginning of the end’, Covid is a permawar. (FT)

Wall Street frets as Warren ally takes consumer protection role
After four years of hibernation during Donald Trump’s administration, the US financial regulator charged with protecting consumers was always going to get a new lease of life under President Joe Biden. This week’s nomination of Rohit Chopra to run the Consumer Financial Protection Bureau was a signal that the new administration wants it to quickly roar back into action. (FT)

Intel hacked Intel said it was the victim of a hacker who stole financially sensitive information from its corporate website on Thursday, prompting the US chipmaker to release its earnings statement ahead of schedule. Subscribe here to the #techFT newsletter. (FT)

Facebook’s ‘Supreme Court’ to review Trump ban The social media platform is referring its decision to suspend Donald Trump’s account to its independent oversight board for review, in the first big test of its newly formed “Supreme Court” appeals body. (FT)

IBM sales decline The company revealed its revenue decline accelerated in the final quarter of last year to 6.5 per cent, a larger drop than projected, as its normal end-of-year consumer IT spending bounce proved weaker than expected. (FT)

ECB details bond-buying shift The European Central Bank will decide how much to spend on its emergency bond-buying programme by checking if bank lending rates, corporate credit conditions and government bond yields are favourable enough to boost demand and inflation. The ECB and the Bank of Japan both kept monetary policy on hold.

UK stands firm in EU envoy row The UK on Thursday showed no sign of changing tack after refusing to grant the EU embassy in London full diplomatic status — treating the mission as representing an “international organisation” rather than a sovereign country — a snub that former US president Donald Trump also inflicted on the bloc but later reversed. (FT)

Amazon pandemic price rises stick Hundreds of the essential products that have come to define pandemic living have sustained significant price increases on Amazon this year, with some jumping to multiples of their original price. (FT)

Fifa fights ‘super league’ Fifa has sought to block the launch of a breakaway “super league”, as top clubs including Real Madrid and Manchester United ramp up talks over creating a competition that would radically alter the finances of the world’s most popular sport.

More on the business of sport in our Scoreboard newsletter. Sign up here.

Economic data IHS Markit’s manufacturing and services PMI data for January are due as well as existing home sales for December that are set to fall for the second month. (WSJ)

What else we’re reading

What’s next for QAnon? The pro-Trump cult believed the US election results would be violently overturned on January 20. “For some followers, watching Biden and Harris sworn into office was a breaking point in their beliefs,” said Jared Holt, an extremism researcher at the Atlantic Council. (FT)

The US is back in the Paris climate accord. Now what? Rejoining the Paris deal was one of Joe Biden’s signature campaign pledges. But the move is just the start of a long journey to reform US climate policies, experts said. We answered your questions about the green transition. (FT)

Inside the Brexit deal: the agreement and the aftermath As the year drew to a close, the Brexit denouement finally arrived. But the impact of Boris Johnson’s deal was already being felt in the real world. As businesses adapt, negotiators on both sides reveal what really happened. (FT)

A golden age of ignorance Has there been a moment in modern history where so many people in free societies have believed such damaging lies? The simplest explanation is: “There are idiots. Look around.” But while there is a certain visceral satisfaction in that explanation, there is much more going on, writes Tim Harford. (FT)

Tech sector looks beyond WFH For tech, 2021 will be a moment of reckoning, writes Richard Waters. Which of the industry’s “pandemic wonders” have real staying power, rather than simply sold a temporary fix for a world in pain? And are the tech industry’s claims of reaching an important inflection point in the shift to a more digital economy valid? (FT)

Algorithm tug-of-war Lilah Raptopoulos writes that she is at war with algorithms, addicted to a network of companies that are financially incentivised to reinforce detected patterns, take what she already likes and give her more of the same. What is this process doing to our self-conception? What can we do about it? (FT)

London’s falling population For the first time in 30 years, London’s population is declining. Since the outbreak of the pandemic, almost 700,000 foreign-born residents may have left the city. How will this affect rental and sale prices? Chris Giles argues that we need to know the effect of Covid-19 on the number of people in the UK. (FT)

How did stockpickers fare during Covid-19? After new year’s hangovers wear off, many take stock of the previous year to understand what went wrong and how they could have done better. Robert Smith tallied some FT scribes’ stock choices — and the winning reader entries. (FT)

Video of the day

Mexico’s avocados: curbing the thirst for ‘green gold’ Mexico’s avocados are worth nearly $3bn in annual exports but every day they suck up 9.5bn litres of water, and as production climbs the impact of irrigation technology that reduces water consumption and increases yields is becoming ever more important. (FT)

Thank you for reading. Send your recommendations and feedback to [email protected]